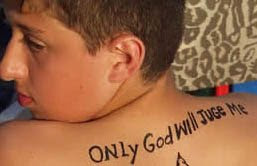 I’ll never get a tattoo – don’t like either needles or permanent alterations to my body – but I do like reading about them in fantasy.

Especially when they’re beautiful, as in the case of the marque of courtesans in Jacqueline Carey’s Kushiel's Dart

. Each courtesan owes a debt to their House, but can use the money they earn to pay for a marque, or tattoo, on their backs. When the tattoo is complete, the debt is paid.

With some effort, I recogmized the underlying design, which was based on a very old pattern, the briar rose. Somehow Master Tielhard had kept the dramatic vigor of the archaic lines, yet infused them with a subtlety that spoke at once of the vine, the bond and the lash. The thorny lines were stark black, accented only in a few choice hollows with a teardrop of scarlet – a petal, a drop of blood, the mote in my eye.

Tattoos, as such, are a mark of station and status. As in real life, they can indicate what a person is, and what organization they belong to. Since it takes time and skill to construct a sufficiently realistic and detailed tattoo, in a fantasy society this can be a sign of a person’s ability to afford one.

. An assassin has one in the shape of an Egyptian glyph meaning Destroy. Maybe other people, in such a society, might wear prayers for the purpose of defense. Would a vampire be able to feed off someone who had a cross tattooed on his throat?

But tattoos can be a sign of shame and punishment as well. The inmates of concentration camps were forcibly tattooed with identification numbers. In a fantasy society it’s often easier to brand a person, since tattooing means they have to be still for an extended period of time. If that’s feasible, though, and if branding is not desirable, they could be marked accordingly. Maybe someone who narrowly escaped the gallows could have the tattoo of a hangman’s noose around one eye.

In a role-playing gamebook I once read (Blood Sword 5: The Walls of Spyte), a character’s tattoos contained bound demons which she could summon, and there’s a Boris Vallejo painting of a man with a dragon tattooed on his upper arm. The dragon’s upper body rises out of the ink, becoming three-dimensional, and turns its neck to sink tiny fangs into the man’s flesh.

Tattoos can be studded with rhinestones or might incorporate thin slivers of metal embedded into the skin as well. They can be as elaborate as you like – and serve a dozen different purposes.

What tattoos do your characters have?

"Would a vampire be able to feed off someone who had a cross tattooed on his throat?"

Sure, so long as they don't have a cross tattooed on their inner thighs (which would be a pretty un-fun place for a cross imo).

Kidding aside, the RPG Exalted has an interesting take on tattoos: preserving the integrity of one's form. A group of shapeshifters forced to live beyond the borders of reality, where the laws of physics are more like suggestions, get tattoos made of magical liquid silver that fix their forms and prevent them from getting any mutations not of their choosing. They can still shapeshift, since that's a change under their direction, but they lose some flexibility in how they can do it. They can also use this magic metal to "integrate" weapons and armor into their bodies, so that they could always have the protection of chain mail if they get the right tattoo designs all over their bodies (which won't look like chain mail, but would look like their form-fixing tats, so an opponent of these shapeshifter would do well to learn what the designs mean).

One of my characters has a tatto that marks the kingdom she's loyal to, though she's loyal to many. Thanks for posting! This gave me lots of ideas.

I love this post. Recently the concept of tattoos in fantasy has become interesting to me, and it was neat to see the different possibilities you explored here.

Only one of my characters has a tattoo (that I know of--you never know what that bunch) and its a symbol that represents his fiancee. They think of themselves as a lady and her knight, so he wanted to permanently carry his lady's emblem.

In my new project I've got a group of twenty or so children who are all possibly the 'chosen one' of a rather large prophecy. They've all been bought from their parents and raised to be a honor guard for the leaders of the island they are from.

Since the island's main trade resource is sea serpent meat the children are tattooed with a white 'Striped King' a rare albino version of the most powerful animal on and around the island. The albino striped kings are considered an omen and the last one seen marked the invasion of the island from another culture.

JH - Ew. What kind of kinky vampires are we talking about here?

I like the idea of a tattoo fixing someone's form. And weren't tattoos used for information purposes in World War II as well - SS officers having their blood groups tattooed on their arms?

M. G. Pereira - Hopefully she doesn't become a spy (or if she does, hopefully she's not caught and searched!).

DuskRose_Dreaming - Thanks for commenting! And I like the symbol idea more than tattooing the lady's name.

dldzioba - Children with tattoos are always striking, partly because we just don't expect to see that kind of alteration on a child.

Very cool backstory to the tattoos as well!

hahaha, she actually has much more visible things that make her unliked, poor thing. But that's a good idea for another story :)

Ew. What kind of kinky vampires are we talking about here?

The kind that get an HBO series...

I like the idea of a tattoo fixing someone's form. And weren't tattoos used for information purposes in World War II as well - SS officers having their blood groups tattooed on their arms?

That's not something I have heard, but I would be interested to know about.

In one of my fantasy worlds, children, at age ten, receive a magical tattoo--magical in how it's placed on their upper right arm--of a hieroglyphic word from which Seals their Name to them. This is the age at which they choose an adult name and begin taking on adult responsibilities. In mage born, the Name Seal glows.

Adults who get married may pay to have a marriage Mark Sealed to their upper left arm. This Mark is always the hiegroglyph representing their spouse's Name and matches the name Seal on their spouse's right arm. Such marks will glow of the spouse is mageborn.

Parents receive similar tattoos with their children's names on their thighs (beginning with the right one) when their children choose their Name (there is a special Mark for Nameless Ones, and that Mark will change if the child chooses a name at a later time). The name Marks of mageborn children glow.

Priests have single-colored celtic knot-like Marks Sealed around their upper arms just above the elbow. The color indicates the Diety whom they most closely serve.

tattoos and vampires ... my favorite topics! I love the post!

In my novel the protagonist is a Landomeri. All Landomeri get discreet facial tattoos as a coming of age ritual. Hadde (the protagonist) has three small rayed suns tattooed on her cheekbone.

Hadde spends most of the novel in (civilized) Salador, where people don't wear tattoos. Hadde's tattoos (and her clothing) mark her as an outsider.

JH - Sadly, I don't have a TV and am woefully uninformed when it comes to current shows.

It's a good way to deter telemarketers trying to get me to sign up for extra channels, though. Their scripts never take people without TVs into account.

A. Shelton - Neat, another example of children with tattoos! And I like how those tattoos serve a necessary function as well.

It makes me wonder, though - what do married people do about their tattoos if they get divorced?

tattoo nerd - There's a lot to be said about tattoos, isn't there?

Matt - I like biological alterations of the face (those are so striking and difficult to hide) but tattooing of the face is starting to grow on me after reading these comments and descriptions. The image of three tiny suns is so vivid.

Was talking about the HBO vampire show "True Blood." They seem to have decided that vampirism as a metaphor for sex was insufficient...