The story of Katherine and the fish


After living in Iqaluit for two weeks now, I've had some... interesting, shall we say?... experiences, but before I get too deep into those, here's a story one of my co-workers told me about her attempt at ice-fishing.

So Katherine went out on to the ice to try her luck, and she stayed there for what felt like several freezing hours without a bite. Nearby, though, an Inuk woman was at a similar hole in the ice, pulling out big fish after big fish with ease.

Finally Katherine felt a tug on her line. Excited, she hauled on it, only to bring up a tiny fish the length of her finger.

The Inuk woman looked over at it. Obviously trying to be encouraging, she said, "Catch eleven more of those and you can make soup!"

At that moment a large raven swooped down, grabbed Katherine's fish and flew off. 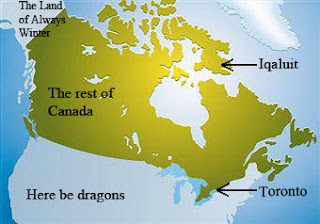 I've been offered a job in Iqaluit, which is a little distance from Toronto (see map for further details). It's a four-month contract position, so I should be back before the winter really sets in, which is a bit of a relief since winter temperatures in Iqaluit can get down to -45 C. -65, with wind chill. You can see how close the place is to the Arctic Circle, which means the sun rises just after 3 am.

It's going to be quite the experience. I've never lived anywhere so far north; apparently that's all permafrost, so there are no trees or even much vegetation. Iqaluit is also the only territorial capital which is not connected by highways to the mainland, so all groceries have to be shipped or flown in except for local fare such as caribou, seal and Arctic char. I'm going to be flying up there Monday morning, and I don't know how reliable my Internet connection will be after that, but I'll use any free time (when I'm not working or taking in the local culture) to get some writing done.

The island-state of Nollop was named after Nevin Nollop, who devised the pangram “The quick brown fox jumps over the lazy dog”. His accomplishment is commemorated in a memorial monument with 35 tiles spelling out his immortal sentence.

The problem begins subtly, though, when the Z tile falls off.

Ella Minnow Pea, one of the islanders, writes to her cousin Tassie to explain that the islanders’ Council has met to discuss the implications of this. They conclude that, rather than the tile’s fall being a random event, it must be a sign from the island’s favorite son. Nollop no longer wishes the letter Z to be used, and therefore it must be removed from use and vocabulary.

tells the story of how the island’s community and culture spirals down from there. Eliminating the Z doesn’t seem too difficult at first, but when Tassie’s mother, a teacher, accidentally refers to twelve eggs in a different way, one of her students reports her to the Council. Penalties are imposed for such misdeeds, and a third offense means banishment from the island.

The Q drops off next, and the J. As news spreads, the editor of an American journal arrives with the news that chips from the broken tiles have been smuggled to a laboratory for analysis. The glue affixing the tiles to the monument is faulty, and chemists predict that more tiles will fall.

As that happens, the islanders’ vocabulary shrinks along with their numbers. People who have not been banished have fled; those who remain have to change their names to avoid forbidden letters. And Ella tries her best to devise a new pangram that will replace Nollop’s all-but-deified sentence, because only this will convince the Council to relent.

The book starts sedately, but once the islanders take their first steps on to the slippery slope of censorship and totalitarianism, the plot picks up speed. It’s both fascinating and unnerving to see how fear eats away at their common sense and social structure, turning otherwise good people into informers and fundamentalists. And yet the story unfolds with both elegance and humor, such as when the Council sends written notice of deportation to a woman, concluding with: “You may bring two suitcases. We will permit, also, one hatbox.”

As well as being an engaging satire, this is a great read for anyone who enjoys the written word. It was on my must-buy list, and now it’s on my shelf.