As a college student (though not for much longer!) I'm always looking for ways to save money. So I mentioned earlier that I had signed up with Swag Bucks, and I thought a post about the results thereof would be in order. Here's a list of the things I've paid for with SB, from May 2011 on.

1. DVD of The Full Monty

. I love British comedies, so I've always wanted to watch this.

. To join my collection of books on writing and publication. I'll do a review of it later.

3. William Rehder's Where the Money Is

. The subtitle of this is "True Tales from the Bank Robbery Capital of the World", and it's by a former FBI agent. It's an incredibly fun read - not only did the information make me feel like an insider on both sides of the law, but the style is breezy and amusing. I especially liked the story of the Hole in the Ground Gang.

. Talk about a life less ordinary.

How does Swag Bucks work? Basically, you get points awarded (on a random basis) for using Swag Bucks' search engine, and it's possible to win three or more times a day. There are also a set number of points that can be earned daily for voting in a poll, clicking on a toolbar, playing games and so on, plus Swag Bucks gives out daily codes which can be entered for more points. Points can then be traded for gift cards, such as PayPal or Barnes and Noble. I always order the $5 Amazon.ca gift card, and I earn 5 of those a month (it's possible to earn more, but IMO you have to be pretty dedicated for that).

An extra $25/month comes in very handy. Especially since even third-party sellers on Amazon can be paid with gift cards, meaning I can buy some of the out-of-print books I've wanted for years.

So I recommend Swag Bucks as a great way to earn a little extra cash that (for me at least) can only be spent on books and DVDs. Before, I had a list of books I wanted for my collection, but because of my budget I would only cross off one or two every year, usually for Christmas. Now the list is shrinking. I feel thoroughly self-indulgent.

And here's my referral link. :)

Which keys have you lost? 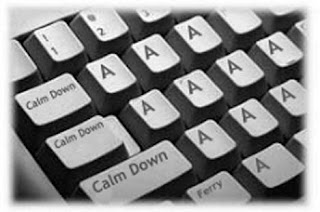 So two months of writing and editing that had me chained to my computer are over.

There were entire days I didn't leave my apartment, and since I live in a basement I like emerging occasionally, just to remind myself that the World Above still exists. Well, now I'll get more than enough of that, with clinical placement starting in just over a week's time. But I made a self-imposed deadline so I'm pleased about that.

I also noticed that several of the keys on my keyboard are worn away. The O is a semicircle and the I has vanished completely. A, S and T do not exist from the waist down. Both E and H are reduced to a single lonely angle and L is now |.

I mentioned that to a friend who said her Backspace key was worn away. Mine still looks new. Perhaps I should do more editing.

If you've lost any keys, which are they?

A Dance with Dragons Contains spoilers for A Dance with Dragons

Short review : Better than A Feast for Crows

, not as good as A Storm of Swords

Long review : Where to start?

With the good, mostly Jon Snow’s chapters. Developments at the Wall are fascinating, and they tie together well with the return of Roose Bolton plus fake-Arya. Towards the end, though, Jon alienates some of his own men, pens up his direwolf and is then backstabbed by said men - in other words, Robb Stark errors and a Jeor Mormont ending. But at least he’s not likely to be as dead as either of them.

Another interesting character was a complete scum, but he’s captured and maimed by someone even worse. This results in a redemption of sorts and he saves an innocent woman who’s similarly a captive. He’s called Jaime Lannister or Theon Greyjoy, but despite the déjà vu, Theon’s chapters were gripping. His terror and degradation came through vividly, and Ramsay Bolton vies with Joffrey for the Most Hated Character award, though I could have done without the endless “Reek, Reek, it rhymes with…”

Tyrion and Dany fare less well. Tyrion’s chapters are a travelogue wherein he meets many, many people, at least one of whom was previously thought dead. And although he’s heading for Meereen, he doesn’t get to meet Dany.

Though perhaps that’s for the best. Dany was amazing in previous novels, but here she’s trying to recapture all her tweenage years, especially with Daario. She also marries one of the Ghiscari (which means he’s dead meat one way or another), vacillates endlessly about whether to open the fighting pits and takes dozens of hostages whom she cannot bear to harm, so they end up being much safer with her than with their own people. Finally she imprisons two of her dragons because they’re growing wild, which naturally makes them even wilder. Her story does end on a more promising note, though, and I still want to see how she eventually conquers Slaver’s Bay.

Not to mention Westeros, because Cersei’s days as queen there seem to be coming to a well-deserved end. The High Holy Septon makes her pay dearly for what she did… and that’s only the start of her troubles. I don’t think even FrankenGregor (who makes an appearance) can get her out of this.

Minor characters fare as can be expected. Victarion Greyjoy is still en route to Dany, Davos Seaworth is still the universe’s whipping boy and Melisandre is still mistaken. But Wyman Manderly and his pies were shocking and delightful.

All in all, though, there’s no way this series can be concluded in only two more books, not even if Martin tightens the prose to the squeaking-point and every character refrains from their favorite catchphrase forever. There are simply too many characters – for each one killed off, three new walk-ons are introduced and someone else rises from the dead.

And there’s too much description – granted, it’s usually well-written, imaginative description, but it’s only padding the book. In A Storm of Swords

, what happened in Tywin Lannister’s privy was a darkly ironic joke that finished the chapter with a snap. In this book, what is achieved by describing the results of Daenerys taking a squat? The story’s realistic enough without all the body fluids.

I’ll still buy The Winds of Winter, but I’m not likely to shell out for a hardcover again. If you've read ADwD, what did you think of it?