Five uses for disease in fantasy


This is inspired by a book I read recently – The Speckled Monster: a Historical Tale of Battling Smallpox

. Smallpox was one of the most feared diseases in the world, and for good reason. If it didn’t kill its victims, it often left them horribly disfigured or even blind, when the pocks involved the eyes.

So, what uses can disease be in fantasy worlds?

There’s precedence for this in real-life. People with the abnormal red blood cells produced by sickle-cell anemia have some protection from malaria. Maybe in a fantasy, people with terminal cancer become able to see glimpses of the future—including their own inevitable deaths. Or what if such superpowers were linked to genetic conditions like Down’s syndrome?

2. Adds physical flaws to a character

I once read a romance novel (Lorraine Heath’s Sweet Lullaby

) where the hero had smallpox scars. They probably weren’t that disfiguring, but the very fact that he had an imperfection that wasn’t the usual thin, rakish duelling scar was something I remember years later.

Other diseases leave their own marks. Meningitis can lead to the amputation of limbs, and trachomatis to blindness. Be creative with fantasy diseases—perhaps being bitten by an infected mosquito leaves you with insectile features like compound eyes.

This is my favorite, and yes, it can work in a medieval fantasy—though the flying corpses of Kaffa may not actually have spread the bubonic plague through a city in real life. Any communicable disease can work, as long as it acts quickly (AIDS is out) and can be spread with relative ease (AIDS is out, again). More effective killers would be transmitted through aerosols or droplets, by casual touch, by vectors like insects or by water.

It would also help if animals or humans used to spread the disease did not show any symptoms while they were infective (or even afterward—if they were the equivalent of Typhoid Mary). Rabies would be a great way to spread terror through a population if animals didn’t behave strangely or foam at the mouth.

This is a great way to provide some privacy in a medieval world. If a ship is coming into a foreign harbor with a cargo that might be better off not declared, have her docked at a distance while she’s inspected, on suspicion of plague. Of course there is none, but no one’s going to risk going aboard until that’s confirmed.

Plus, if a character makes her face up such that she resembles a leper, not many people will get close to her. Or know what she actually looks like, for that matter.

Humanoid populations probably don’t breed at such a rate that they would require this kind of check on their numbers, but it would work for any fecund species which might otherwise strain the environment’s carrying capacity. Think myxomatosis decimating rabbit populations in Australia.

This might, of course, be a problem if a humanoid population depended on this species for food. Or if the disease spread to the farmers and herders as well…

The Spell of the Black Dagger

One of the things I enjoy about Lawrence Watt-Evans’s Ethshar novels is that the main characters are so ordinary. On the rare occasions that they have inherent magic, it tends to be either so basic it’s not of much help, or it has such a significant flaw it becomes a problem in and of itself.

In The Spell of the Black Dagger

, Lady Sarai, the Minister of Investigations of Ethshar of the Sands, is one of those people who lack any talent in magic. Desperate low-life Tabaea the Thief is another. And although they start out worlds apart in every way, their paths cross in a clash that will involve every kind of magic… and shake the city to its foundations.

It all begins when Tabaea sneaks into a wizard’s house and spies on him as he teaches his apprentice how to make an athame, the magical dagger which every wizard carries. Tabaea gets the bright idea of listening in on the entire process and making her own athame. Being a wizard (albeit one lacking Guild authorization) has got to be easier than stealing for a living.

Except she gets something wrong. The dagger turns black, and doesn’t give her any magic powers of her own, much to her despair.

What it does do, though, is something she discovers much later. When she kills someone with it, she gains their power — whether that person is a wizard or a warlock (capable of flight and telekinesis) or a witch (able to sense when someone is lying).

Watt-Evans’s characters never behave as though they’ve read the script, so Tabaea kills a theurgist and a demonologist as well, to see if she gains their specialized knowledge. That doesn’t work, but the string of unusual murders catches Lady Sarai’s attention, and as the Minister of Investigations, she sets out to find the killer. Meanwhile, the Wizards’ Guild is after Tabaea as well, to avenge the wizard she murdered.

That’s when they find out the Black Dagger negates any spells cast at her. Oh, and each time she kills someone she gains that person’s life, meaning a sword-thrust to the heart will stop her in her tracks for a moment or two until she recovers and strikes back — with more power than any wizard has ever had. What happens when her newfound power goes to her head, how the magicians of Ethshar join forces to stop her and what Lady Sarai does to reach her first… well, better not spoil it for anyone.

I enjoyed this book thoroughly and would recommend it to any readers in the mood for great worldbuilding, realistic characters and a solid story. Watt-Evans’s The Unwelcome Warlock

is on my list of books to buy as well, and I’ll be sure to review that when the time comes.
Tweet
Posted by Marian Perera at 10:16 AM 5 comments:


It’s good to be back here—in my own place, in the bright lights of the big city and in the blogosphere as well. I was so busy and stressed in Iqaluit that I didn’t feel up to writing, let alone blogging, and my Internet connection was such that the latter probably wouldn’t have been feasible anyway.

I saw a seal-skinning contest and ate a bit of the raw seal meat as well. I also tried raw blubber and raw Arctic char, though the latter tastes better cooked, IMO. I staggered to work through the start of a blizzard and bought bear carvings and learned how to say “white man” in Inuktitut. But now I’m back, and here are a few of the pictures from my sojourn in the Land of Always Winter. Also some from a brief trip to Nova Scotia, which was a lot more fun.

Enjoying one of Nature’s popsicles in the Sylvia Grinnell Park. Would you believe this picture was taken in June?

So was this one. I took off my coat and sweater for the photograph so I would look hardcore, and I was shivering uncontrollably. 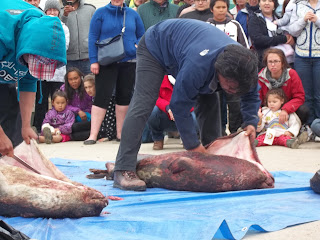 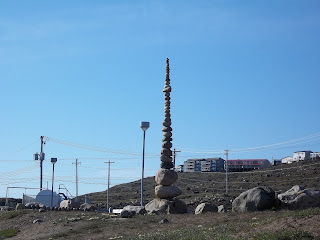 One of the many stone sculptures in Iqaluit. 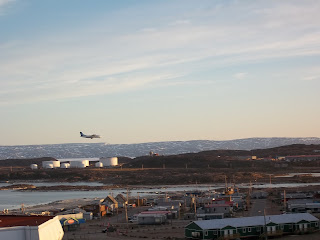 A plane coming in to land. 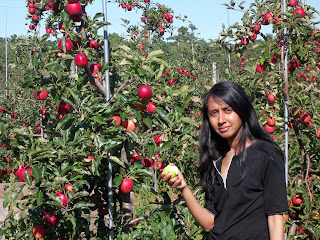 Picking apples in Nova Scotia. I’ve never eaten so many apples, and it was fun learning to tell the different strains apart. 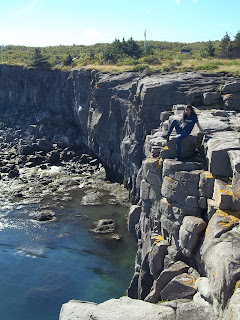 This is one of the most incredible views I’ve ever seen. That’s the ocean framed between the rocks, and a huge seaweed garden waving softly in the tide. 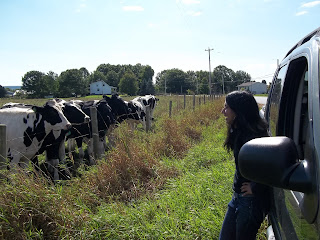 The car stopped at the side of the road so I could look at the cows… and all the cows promptly congregated at the fence to look at me. 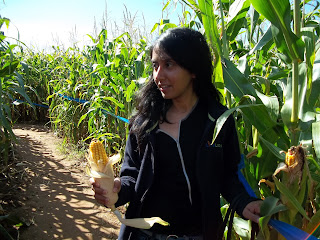 A corn maze. I’m pretending I’m in “Children of the Corn”, hence the peculiar expression. 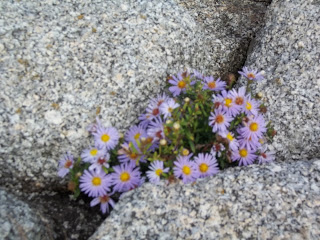 Flowers growing between the rocks at Peggy’s Cove.

It was definitely an unforgettable time of my life.