Why do watchdogs like Writer Beware warn people about literary scams?

Why not allow those people to either indulge their publishing fantasies with a stealth vanity press/fake agent, or do the research and get away? That way, the savvy writers will be fine and the rest will get to play pretend. Most manuscripts are unpublishable anyway, so for many of those writers the vanity press may be their only chance to see their names in print.

This is a paraphrase of an argument I once read. The idea is to practice the literary equivalent of Social Darwinism, allowing scams to cull the naïve or inexperienced from the herd and operating on the assumption that such victims are unpublishable and always will be unpublishable. So it’s no loss.

This idea has a surprising number of proponents. But what’s the problem with this again?

If it’s wrong to rip off a brilliant and experienced writer, it should also be wrong to rip off a naïve person who can’t string three words together. That the latter may be easier to do doesn’t change the fact that something unethical has been done.

A lot of writers produce unpublishable slush when they first start out. I know I did. But does that mean that these writers will never improve, and therefore it’s all right for someone to sucker them into a scam?

I don’t think so.

No one has the right to decide that a writer, any writer, is so unskilled and so incapable of improvement that he or she deserves to be saddled with illusions and empty promises (and debts, in the worst case scenario). If the writers sign up with a questionable agent or a vanity press knowing what to expect and aware of potential problems, that’s different. But even if they’re naïve or desperate, they still have a right to hear the truth.

No writer deserves to be taken advantage of.

in their chubby little fists (and even that book doesn’t cover all the myriad forms a literary scam can take). They have to learn. Some learn from actual publishers or from experienced writers, but some learn from a scammer or that scammer’s defenders.

If writers don’t know any better, they may take that as the truth. Scams are nothing if not slick and plausible.

”I believe you sincerely are trying to be helpful, but you are… taking away the sense of a fulfillment and accomplishment they should be feeling for being in print by focusing on what REAL publishers do for REAL writers.”


The problem is that this sense of accomplishment won’t last long. Vanity presses – especially the kind which try to pass themselves off as real publishers – give writers a feeling of success, but this feeling is unlikely to survive contact with bookstores, impartial reviewers and the writer’s first royalty check (or lack thereof). Writers soon realize that their books have no sales other than what they provide. They realize that the glow of gold at the end of their rainbow was the luminescence of radioactive waste.

And the letdown is all the worse as a result. The hard work and frustration involved in polishing one’s writing and getting rejections is nothing compared to knowing that you were taken for a ride, that you believed the lies, and that others knew it but said nothing.

Finally, there’s no such thing as a REAL writer/fake writer distinction. We’re all writers.

5. The argument from self-righteousness.

It’s easy to think, “I would be too smart to fall for that. Therefore you deserve what you got.” Sometimes it’s genuinely difficult for experienced writers to see how anyone could not do the research and learn about the scam.

But when you’re down-hearted from too many rejections and someone says they believe in your work, that produces an emotional high which overrides caution.

Even doing the research doesn’t always work as it’s supposed to. Someone who’s unfamiliar with publishing may not understand why established publishers are safer than “getting in on the ground floor” of an eager new company. I once contacted two writers who had been with PublishAmerica originally, but had moved on to self-publishing. I said I was looking for a publisher for my first novel, and did they have any suggestions?

They both recommended PublishAmerica, without a hint of any problems that I would face by following their suggestion.

Anyone can be deceived under the right circumstances. That’s why we warn writers about scams.

, released by Loose Id, I had to give it a try.

There are plenty of examples from the author’s books, with the author adding notes throughout to show what she was trying to do in terms of intensifying conflict and deepening the relationship. I also appreciated the warning about what can happen if you tease your readership too much. The more you build up the anticipation leading to the sex, the better that needs to be.

The example given here is of one book where this buildup lasted for hundreds of pages. When it finally did happen, it didn’t last very long (due to the author, not due to the hero) and the impression that gave was of an author who wasn’t really comfortable with writing about sex. Hence the protracted teasing which lead up to a fizzle. Personally, I’m fine with fade-to-black in novels like Gone with the Wind, but yeah, if I pick up a hot romance I want heat.

The book also includes notes on fight scenes, medieval battles, the difference between plate and mail and why the designs of swords changed—which I wasn’t expecting. It’s an unexpected bonus in an erotic-writing book.

From a physics standpoint, a gun that could send somebody flying would also send you flying in the opposite direction when you fired it. So resist the urge to knock somebody through a plate glass window with a bullet.

But it looked so amazing in Blade Runner!

Tweet
Posted by Marian Perera at 10:26 AM No comments:

Links to this post
Labels: books on writing, reviews, romance


I visited the Toronto harborfront recently when I heard some tours of boats were available. Always a good idea to do hands-on research, even though the ships I'm writing about at the moment aren't at the same level of technology. But it was a fun experience and I took some pictures.

I like ships and planes. This one got them both in the same shot. 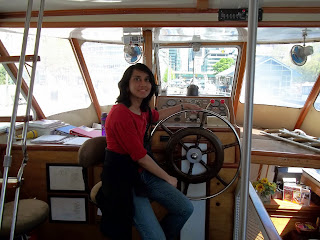 Here I am taking the wheel on the Mariposa cruise boat Rosemary. Twin diesel engines, 1064 hp, 14 feet wide, 60 feet long. Yacht certified for "sheltered water", meaning she has to stay within 1 nautical mile of the shore. 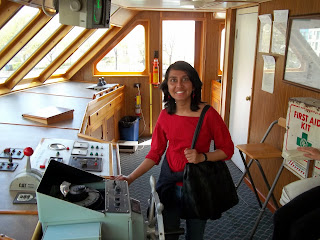 I'm on the bridge of the much larger Mariposa cruise ship Captain Matthew Flinders. Three decks and can hold 575 people. The captain also provided some interesting details of what it's like on the bridge, e.g. at night, the bridge is kept completely dark so that the crew can see everything outside easily. 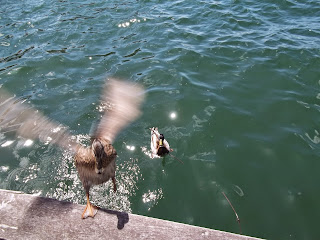 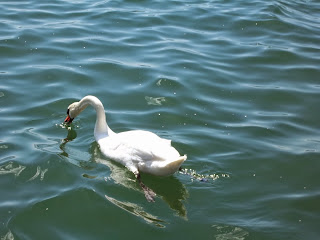 The swan was more laid back about it.

It was fun, though I still wish I could have a few hours on an actual sailing ship. Some day...
Tweet