The Misty Mountains. The Spine of the World. Mount Doom. The Frostfangs. The Mountains of Madness. The Goblins’ Teeth.

Mountains in fantasy often have evocative names. It’s probably best not to be too obvious — e.g. calling the villain’s stronghold Nightmount or Vultures’ Peak, because a little of this goes a long way — but such names can hint at a significant detail or two. You know the Frostfangs are likely to be in the Westeros version of the High Arctic.

On a map, mountain ranges should look natural, e.g. not crossing each other at right angles unless this is is done deliberately, to show some aspect of the world. I like the idea of a ring of impassable mountains guarding something at their centre. They form good borders and defenses, which always reminds me of Hannibal leading elephants over the Alps.

Plus, mountains can always be made even more dangerous than they already are. It doesn’t have to be something big like the stone giants in the first Hobbit film. Maybe mountains change ever-so-subtly, such that passes which were traversible last week will have mysteriously shrunk to the dimensions of a needle’s eye when travelers try to go back. Maybe solid rock occasionally crumbles away into a crevasse, millenia of erosion taking place in seconds. Or maybe the mountains grow much faster on your world than they do in reality.

Mountains play a role in myth and religion — there’s Mount Olympus in Greek mythology, Mount Sinai and Mount Ararat in the bible, as well as the Sermon on the Mount. Finally, there are mountain ranges on the Moon as well (though they don’t have the poetic names of the lunar seas), and even further out is the the equatorial ridge on Iapetus, the third largest moon of Saturn. I’m not sure if there are mountains of any kinds on the gas giants, but if there are, their size would be breathtaking.

Finally, you never know what you might find in a mountain—anything from cave paintings to lost treasures to an entire city. Maybe it’s because I grew up in a desert (well, a modern-day desert with air conditioning), but I’ve always found mountains exciting. And looked forward to reading about them.


I tried never to miss a Star Trek episode until midway through Voyager. There were several reasons for this, but the show hardly even daring to nudge the envelope was the most important. Especially when it comes to science, Star Trek could have and should have been at the forefront.

And an alien giving birth from the back rather than the front… just did not quite cut it for me. Not when there are so many more unusual methods of reproducing.

don’t need anyone else’s genetic input for conception, except during a certain time of the year—the titular season. During this time, they can choose to mate, though of course the children produced in this way are likely to be treated differently from those conceived in the more common method.

is similar; the all-female society of the Riding Women would have died out long ago if the women weren’t able to give birth to genetically identical daughters, maintaining their ancestral Motherlines.

The problem that Charnas illustrates in the novel, though, is that such a society won’t have much variation (unless mutation is much more frequent than it is in real life). Hybrid vigor will be unheard-of, and a population without genetic diversity will be that much more vulnerable to infectious diseases.

And it will be that much more difficult for people to be individuals when it comes to thought or belief or behavior as well. If identical twins are sometimes dressed alike, given similar names and expected to do the same things, imagine what it’s like for girls who know that they are doppelgangers of their mothers and grandmothers, all the way back to the first generation.

There was an Outer Limits episode where an astronaut, after exposure to something mysterious in outer space, started budding off an extra finger from his hand. He soon realized that this was just the first part of a whole new body—in other words, he was slowly but surely producing another copy of himself.

Mitosis, like parthenogenesis, doesn’t result in as much genetic diversity as sexual reproduction does, though this isn’t necessarily a bad thing if the parent copy has valuable but recessive traits that might be lost otherwise. It could also be much more convenient — look at how hard animals (and people) work to find suitable mates.

Not to mention that budding, a la yeast cells, might be a whole lot less painful than giving birth.

In real life, prions scare me as much as they fascinate me. There’s something insidious about strands of protein (which technically aren’t even alive) gradually corrupting the normal proteins in your brain. But to take this concept a few steps further, what if people could change others into copies of themselves?

As a long-term method of reproduction, this would carry the same risks as mitosis or parthenogenesis, but as a short-term deal, it could have some very interesting uses. I’m imagining a hostage crisis situation where the terrorists don’t realize is that one of the hostages is a prion, and being exposed to her is altering them by the hour.

I like the indifference of most fish and amphibians — lay eggs, wait for them to be fertilized, go on with life. Of course, this is a viable strategy because they produce offspring in such huge numbers that the death of most of them isn’t a tragedy or even a problem.

Though that could apply to a lesser degree with a humanoid race as well. If each female produced, say, half-a-dozen offspring each breeding season, she wouldn’t need to raise them all to adulthood. She could instead abandon them to compete over limited resources, such that only the strongest survived. And if it didn’t, oh well, there would always be next year.

For this to work, though, egg-production, fertilization and any necessary gestation shouldn’t demand too much of a female. In mammals, so much of the female’s resources go into developing the young that naturally fewer of them are born, and those are nurtured and protected. It doesn’t make reproductive sense to devote nine months and one’s physical health to producing a human infant, only to drop it by the wayside.

Unless someone else is prepared to bring it up, which is a whole ‘nother reproductive strategy a la the cuckoo, and developed perfectly in Bernard Taylor's brilliant but out-of-print horror novel The Godsend.

I remember when I first learned what exactly worker bees — the uniformly female, non-reproducing members of the hive — get out of this arrangement. Bee genetics are such that, by allowing the queen to devote all her time to egg-laying, workers actually pass on more of their genes.

As a result, this is a very viable reproductive strategy and I wouldn’t mind using it at all (as long as I was one of the workers, because being stuck doing nothing but producing child after child is not my idea of a good time).


Yesterday my friend Godfrey arrived with a large parcel, which he said was a Christmas present for me. You know, to make up for the large, beautiful, handmade, solid wood bookcase that wouldn’t fit down the steps. 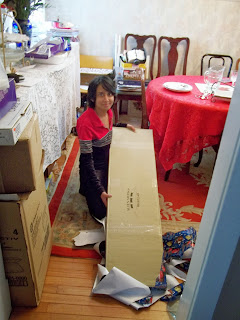 "Wow, Godfrey," I said, "all your gifts make me look so tiny in the pictures."
Godfrey said he was not even going to dignify that with an answer.

The gift turned out to be a lovely, full-size bat'leth. 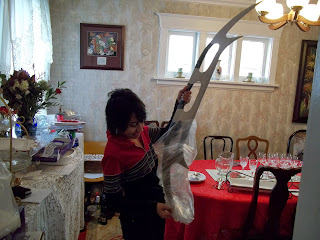 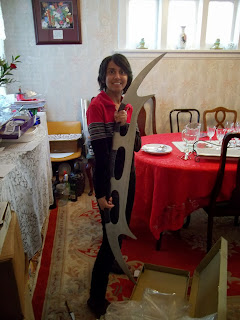 Today is a good day to die! 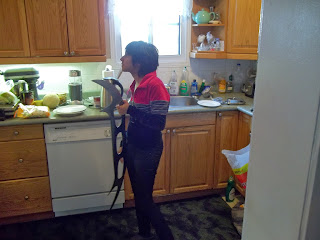 I ran to the kitchen to show my landlady, who’s also Godfrey’s mother, my awesome Christmas present. Not being a Star Trek fan, she turned from the stove and got quite the, er, surprise.

“Why did Godfrey give you that?” she said.

“Because he’s a wonderful person.” I struck a dramatic pose with my new bat’leth. “Don’t you think so?”

“Well, of course, but… why did Godfrey give you that? What are you going to do with it?”

“Hang it on the wall. And then if anyone breaks into the house, I can go all Klingon on their ass.”

Needless to say, that didn’t help. I think she might actually prefer the bookcase.

I don’t usually pick up books where eating disorders play a major role, but I read some quotes from Laurie Halse Anderson’s YA novel Wintergirls

. The style was intriguing and I ended up buying myself a copy. It’s just that good.

The story begins when eighteen-year-old Lia finds out her best friend Cassie has died. Which would be bad enough, but on the night of Cassie’s death, she called Lia 33 times. Lia didn’t answer, because they’d fallen out by then.

Which would be worse enough, except Lia knows what killed Cassie—her bulimia, and the pact they made when they were close as sisters, to be skinniest together. Lia chose not to eat at all. Cassie took the other route, but both roads are leading to the same place.

Living with her father and stepfamily, Lia hides the evidence of her worsening anorexia from them as she tries to deal with Cassie’s death. Of course things get even darker, since Cassie appears to her at night—a ghost? a product of Lia’s guilt? It’s up to the reader to decide—and Cassie is lonely.

She wipes a snowflake off my cheek. “You’re not dead, but you’re not alive, either. You’re a wintergirl, Lia-Lia, caught in between the worlds. You’re a ghost with a beating heart. Soon you’ll cross the border and be with me.”

As the year deepens into winter, where it’s easier to hide weight loss under layers of clothes, the voices in Lia’s head and everywhere else grow more difficult to silence. That’s when she starts cutting herself too. This part is disturbing to read, written though it is in elegant poetryesque descriptions. Though it doesn’t last long, because the house of cards comes tumbling down.

Finally Lia runs away to the motel where Cassie died, where she has to face her fate—and either give in to it or walk out of the woods somehow.

We held hands when we walked down the gingerbread path into the forest, blood dripping from our fingers. We danced with witches and kissed monsters. We turned us into wintergirls, and when she tried to leave, I pulled her back into the snow because I was afraid to be alone.

This book is filled with vivid, evocative passages like that. At times the prose is stark and bitter, at others a dreamy stream of consciousness. Once or twice it gets repetitive in a trying-too-hard way, but for the most part it’s incredibly effective. Anderson is a consummate stylist, and I loved the fanciful or terrifying descriptions in the story.

I loved the symbolism, too. That ranges from pomegranate seeds to Pandora’s box to fairy tales—especially the kind with glass coffins. Pick it up for the style, but stay for the story. It's an unforgettable read.


I have a lot of goals for this year.

The major plans are to get a full-time job and to sell at least two manuscripts (am half-way through one already, so that's more than possible).

Minor items on the to-do list include setting up a nice website and planning a little bit of promotion for when my next novel comes out.

What are your writing-related plans? And all the best to you and yours in the year to come!
Tweet
Posted by Marian Perera at 8:51 AM 5 comments: