is another of the books I got for my birthday earlier this year. I first read it in 2006, and ever since then it's sat on my "To Buy and Keep Forever" list, so I was delighted to receive it. 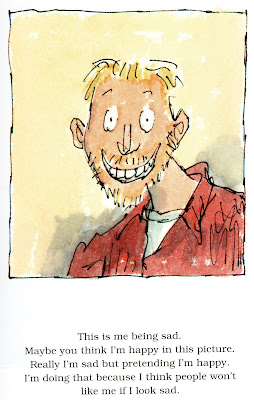 He's sad because his son Eddie died. Drawings of Eddie from babyhood to the teenage years accompany the text - but the last drawing is simply an empty rectangle.

The book then describes Rosen's emotions and how he deals with them. It's one of the few books on grief that would work for adults and children alike, because it's simple, straightforward and honest. I would also recommend it for people who aren't religious, because it doesn't have reassurances that he will see his son again eventually, or claims that his son is now in a better place or still with him in some other way. I got a lot of those after my mother died, and they never helped.

Instead, the book just expresses what Rosen feels, and that is sad.

Sometimes he wants to talk about it with someone else, like his mother, but she's gone too. And sometimes he just wants to keep it to himself "Because it's mine. And no one else's." I thought that was very realistic. Grief is very individual, and everyone handles it in a different way, a way that might not be entirely rational.

As Rosen describes it, because he's sad he sometimes does crazy things like shouting in the shower or banging a spoon on the table. At other times, though, he tries coping strategies - like doing one thing every day that he can be proud of, or writing about sadness.

This last bit means that I don't want to be here
I just want to disappear.

But then he remembers his mother walking home in the rain. He remembers Eddie playing catch with him, laughing with his friends, dressed up as an old man for the school play. And he thinks about birthdays (the antithesis of death and sadness), because he loves birthdays.

There must be candles.

The book closes on a wordless picture of Rosen looking at a framed photograph, with the scene lit by a single candle that burns brightly against the night. It's a restrained, vivid and evocative picture that ends the book with a sense that there is hope. No empty promises, no self-help messages... just a determination to keep going and to keep looking for that small, steady light.

I would recommend this book to anyone.

I came by to read Maria Zanini's interview but I'm ever so glad to have stayed to read this too. It sounds like to sort of book I wish had been around when I was little and struggling on my own to make sense of grief. It sounds like it would have helped. Will look out for it now - thanks!

Yes, I think this book would help children a lot - not by saying that there's a grand purpose to it all or that the lost loved one isn't really dead, but by simply acknowledging that this is what they're likely to feel after a loss. That sometimes, life hurts and isn't fair.

Thanks for stopping by!