The college held a pumpkin-carving contest in the cafeteria a day ago, so one of my professors said she would enter and any of us could sign up to be on her team if we liked. My friends told me to go for it since I'd never carved a pumpkin before, and when the professor heard that, she said we'd take pictures of me helping out.

Unfortunately the professor was ill the whole of this week, and her classes were canceled. I turned up at the cafeteria at the correct time anyway, thinking I could watch the rest of the contest, but not expecting to take part.

That's partly why, in the pictures, I'm not exactly dressed for scooping the seeds out of a pumpkin. Yes, the other members of the professor's team gathered anyway and decided we'd go ahead. :) 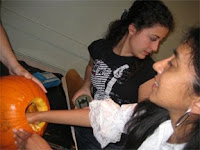 That's me in a lace ruffled shirt reminiscent of the Vampire Lestat. That's also the first time I've put my hand into a pumpkin. It was... surprisingly less squishy and pulpy than I expected.

Ethel, the girl beside me, is keeping an eye on the competition, since we only had 35 minutes for the carving.

And what did we carve?

Behold, the winner in the "Most Creative" category!

(It's a light microscope, and that's a pumpkin seed as the specimen under the objective lens) 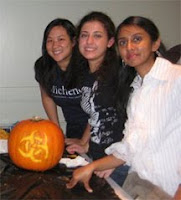 Pumpkin also had a cute biohazard symbol on his backside.

Best pumpkin-carving contest ever.
Posted by Marian Perera at 3:58 PM

I love the 'biohazard' symbol. It's so creepy-looking!

Ethel brought the pictures that we used to carve that. Glad you like it. :)

Roast the seeds in butter for a real treat.

I love ruffly Vampire-Lestat type blouses :-) How fun to get into the spirit of the season!

I like that bio-hazard symbol, which could not have been easy to do (and is also genuinely scary). The first time I put my hand into a pumpkin, I was pretty horrified. Great preparation for motherhood, really.

I actually didn't mean to dress up with the ruffly shirt. I just like wearing that, especially if it's paired with a formal, neutral jacket and knee-high boots. Makes me feel as though I stepped out of Edwardian times.

As long as I can look charmingly eccentric rather than cluelessly out-of-place, I'm happy. :)

Marge, I didn't even know pumpkin seeds were edible. Thanks for the suggestion!

And thanks, Tasha! We've sent pictures to the professor as well (hope she's recovered by now) so I'm sure she's pleased that the pumpkin was a hit. :)

Mary - that last comment made me cross my knees, tightly. :D

Thanks for the compliments!