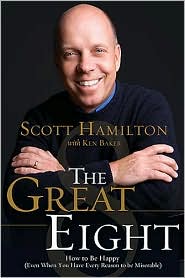 I’m fascinated by figure skating, so so I was interested in reading this book. There are millions of self-help books, but this one was written by Scott Hamilton, an Olympic gold medalist who survived two different types of cancer.

The “eight” in the title refers to the figure 8, which Hamilton had to trace in the ice countless times for the figures that were once compulsory. The book uses skating examples and analogies to illustrate Hamilton’s eight ways in which people can deal with adversity and remain happy.

I like to write reviews a few days after reading the book, with the book closed so I can see how much I remember. With The Great Eight, two of Hamilton’s lessons are ones I hope I’ll always recall. And they’re good advice for writers as well.

The first is the story of the school figures. It’s boring to keep tracing the figure 8 in the ice, again and again. Yet later on, Hamilton realized that the dull exercise had given him stamina and concentration that helped him become a great skater.

The same thing applies to life – and writing. Sometimes we have to choose between a quick fix and years of tiring work with no immediate reward in sight (for instance, vanity publishing vs. slogging through rejections to be commercially published). And when we see other people taking the instant-gratification route, it helps to be reassured that another way is likely to work better for us.

The second lesson is the one about Kristi Yamaguchi’s smile. After taking a tumble, she bounced up and gave the huge audience such a smile that Hamilton, watching, wondered if he had actually seen her fall. Act like a cheerful and classy winner, and very often, people will take you for one.

That being said, the book’s take on cancer did not work for me. Cancer is presented as an experience which will enhance your life – if you let it. Cancer can certainly increase one’s faith in God and make people more appreciative of life, but cancer can also kill you. Or leave your children parentless. So I find it difficult to see cancer as a “gift”.

I would also not give this book to anyone with cancer, because they’re going through enough already without getting the impression that they have to laugh and joke their way through the illness. I appreciate optimism, but in this area, Hamilton’s focus on positivity and happiness is so relentless that there’s no room for any other emotions.

But if readers don’t mind this, The Great Eight might work for them. As for me, I liked the figure skating inside stories and some of the advice, but I can't recommend it wholeheartedly.
Posted by Marian Perera at 7:25 AM

The figure eight exercise is definitely a good analogy for writers. Our ability to tell stories could be an equivilant to flashy triple axels, while the endless years of honing the *craft* of writing are our figure eights.

hm...cancer as a "gift"...I think it's great he can look at it this way, though I cannot say I could ever agree after losing family to it.

Although my mom was a devout Christian and a courageous person, I don't ever recall her telling me that her cancer was a "gift" or a character-building experience.

I'd ask her about it, but she's no longer around these days. Something to do with the cancer.

If not for that I might have liked the book. Still, at least it's not as bad as the Thank God I... book, which contains stories like "Thank God my son died" and "Thank God I was raped" (check the front cover).

Good analogy. Writing and figure skating have quite a bit in common, though I'm always grateful for three things. Not too many people are watching when we fail, our rejection letters aren't put up on YouTube and we don't have to wear cute little costumes to write.

Though now that I come to think of it, I wouldn't mind having a few of those costumes. Just in case, you know. Special occasion.

"Thank God my son died" and "Thank God I was raped" (check the front cover).

That's just freaky. I'm all for trying to make the best out of life. But I think there's a difference between, "Okay. I've gone through something horrible, but I survived, and now I am stronger for it and will try to appreciate life more..." and actually thanking God the horrible thing happened to you in the first place.

Maybe I'm too sensitive, but I'd be sorta hurt if I overheard my parents say, "Thank God my daughter died."

Yes, for me the benefit comes from surviving or dealing with a bad situation, not from the bad situation specifically.

For people who believe that the bad situation is good in and of itself, I can't help wondering. If cancer is a gift, is it wrong to take medical tests meant to prevent the disease? Doesn't this mean you're cheating yourself out of a wonderful opportunity to grow spiritually?

If rape is something for which God should be thanked, isn't it wrong to imprison rapists? Just think, they could be out there giving lots more women reasons to be grateful to God.

{shiver} OK, I don't like it here. I'm coming back to the sane place.