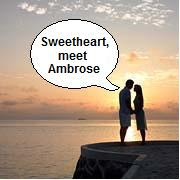 Probably the only novel where this worked for me was Lady Chatterley’s Lover. A few years ago, I picked up a romance where the hero named his penis Ambrose, and I kept laughing during the sex scenes when he referred to whatever Ambrose was doing. Ambrose isn’t what you name a rampant manhood, it’s what you name an elderly British professor.

I’ve only come across this buzzkill once, in the film La Reine Margot, and the sex scenes between the titular character and her homme du jour were made even less arousing by Margot’s maid listening outside the door (with Margot’s knowledge). It was almost a menage a trois.

I’ve read a couple of historical romances now where the first sexual encounter was less than consensual, and to make it a little easier on the heroine, the hero resorted to the use of “cream”. No indication what this 17th century version of K-Y Jelly is made of, or why the hero keeps a supply close at hand. Perhaps he’s accustomed to women who don’t lube naturally in his presence?

Not that there’s anything wrong with that.

I don’t mind the heroine being a virgin, or being inexperienced when it comes to sex, especially in a historical. But unless she’s grown up in a convent, I’d rather not read dialogue like this.

This level of naivety just isn’t sexy. And it makes me want to say, “Now point to the dolly to show us where the bad man touched you.”
Posted by Marian Perera at 4:28 AM

Hahaha, who the hell names their penis, the whole idea is so dumb.