Burned out on vampires 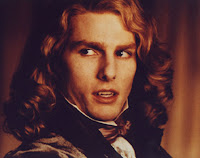 I thought I was burned out on vampires. After devouring as many of Anne Rice’s novels as I could find, way back in 1995 after Interview with the Vampire had first come out, I didn’t want to read more about either the sad, conscience-stricken vampires (a la Louis) or the glamorous loose cannons (i.e. Lestat). I loved Lestat up till The Tale of the Body Thief, and after that I hoped he was resting in peace.

I tried one of Laurell K. Hamilton’s Anita Blake novels, but the vampire Jean-Claude didn’t really appeal to me. Maybe it was all that ma petite-ing. And somehow the very fact that vampires are so popular in urban fantasy and chick lit and YA fiction these days put me off them even more (I’m often the type of person who digs their heels in against peer pressure and goes in the opposite direction). Besides, there’s plenty of other reading material out there.

Then a week ago I was browsing music videos on YouTube, looking for songs by E Nuestro, and I found a great one called “Lucifer”, which seemed to have been used for an anime music video. I kept the music on in the background while I replied to some emails, since the video seemed gory – dark when it wasn’t dripping with blood. Plus, there was some gunman in a long red coat. How strange. The name of the video stayed in my memory, though, since it reminded me of Van Helsing from Dracula.

So the next time I was at work and didn’t have anything to do, I plugged the anime’s title into Wikipedia and read up about it. And this weekend, I made a cup of tea and settled down to watch a few episodes of Hellsing. Well, all right, nine episodes and counting. Did I say I was burned out on vampires? Hellsing is evidence that enough imagination can overcome any burnout. I like Alucard’s striking clothes, weapons of mass destruction, fanatical loyalty to Hellsing and utter are-we-having-fun-yet attitude (pretty much summed up in the psychotic grin that lasts even when he’s being shot to shreds). He’s a great example of what I love about fantasy per se – something which is both accessible and alien, familiar and strange.

The worldbuilding is good too. I’ve always been interested in religion, so I like the two orders of undead-hunters – the Hellsing Organization, which is Protestant, and the Iscariot Division of the Catholic Church. The latter has its own champion, the paladin Father Alexander Anderson, and if I hadn’t already known about Alucard, Anderson alone could have made me watch the anime. The blessed bayonets held in a cross shape, the bible pages skewered to walls… where were priests like this when I had to take catechism classes?

Hellsing isn’t the kind of show that’ll have me obsessively scouring the web for more. But I enjoyed what I saw of it. And it’s good to know that no matter how burned out on something I think I am, originality can still cure that.

”In the name of God, impure souls of the living dead shall be banished into eternal damnation. Amen.”
Posted by Marian Perera at 2:10 PM

"Glamorous loose cannon" is probably the best description I've seen of Lestat. I haven't read the series past the second book, but I remember what a breath of fresh air he was: after Interview's admittedly off-beat and sensitive investigation of what a person might feel like if he becomes a vampire, in Lestat, you're treated to a guy whose first action is to kill a pack of wolves single-handedly.

I haven't seen Hellsing, and honestly all the clips of it I have seen make it look really bad. But I think you're right about creativity being able to freshen up any idea, no matter how stale. Someone once told me about an idea they had for a story about werewolves: they were created by their country as a secret weapon in war, but once the war was over, they were considered unwanted hazards. It was such an interesting allegory for the experience of soldiers trying to return to civilian life that I wish I could have seen what became of that story.

Yes, Lestat usually seemed as though he was enjoying life, so it's not surprising he'd enjoy unlife as well. ;)

Hellsing isn't great; it's not the kind of thing I'd reference in more than one blog post. But some of the ideas behind it make me wish that more was done with them (just like the werewolf story).

I was just watching the episode where the Valentine brothers invade the Hellsing headquarters and Luke takes on Alucard. "Commencing the Cromwell Initiative." Luke had no idea what he was dealing with, poor twit.