There’s no reason creatures from another world have to see in all the colors that we do. For that matter, I’ve read that dogs have dichromatic vision, rather than trichromatic, as we do.

Maybe aliens see everything in black or white – or in shades of colors like red or blue. Their identifying marks and decorations might therefore be very clear and obvious rather than relying on subtle variations in color. Or since they receive less visual information, perhaps they rely more on sound and smell cues.

Makes me think of the Jack Vance race which carried and played small musical instruments to compensate for their lack of facial expression. The type of instrument and the music played provided emotional cues.

To bees, flowers look like this in visible light… 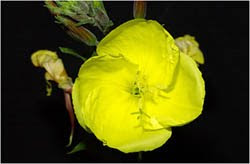 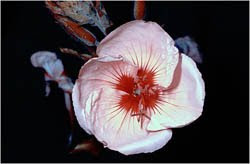 An intelligent species capable of seeing in UV would have a distinct advantage when it came to espionage. Hidden messages could be written in chemical compounds that are only visible in UV, and those messages would be hidden from humans but blindingly obvious (pun intended) to them.

3. Ability to see in darkness/through water

Eyes capable of detecting infrared radiation would be able to see in the dark. I’ve always liked those infrared photographs with colors based on heat – white is the hottest, blue or violet the coolest. The only problem would be the detection of objects which are at the same ambient temperature as their surroundings – a rock on the floor, perhaps.

As for seeing in water… I don’t mind beautiful naked mer-people with long flowing hair, but I always wonder how they can see underwater. Water doesn’t transmit light as well as air, so even if they had a transparent eyelid (similar to the nictitating membrane) to protect the lenses of their eyes from saltwater, they’d still have difficulty seeing.

They could have relatively large eyes, as fish do, though an Ariel with huge bulging eyes would not have been as attractive. In fish, that also compensates for the lack of an neck; fish can’t turn their heads from side to side, so their eyes have a greater field of vision.

This might come in very handy in a world where there were pockets of dangerous gases such as carbon monoxide or hydrogen cyanide.

I once read a book about a girl who had an illness that made everything appear like glass to her – people and trees and buildings alike. Of course, like glass, these were also transparent. She could see the inner workings of everything, from sap rising in the stems of plants to tumors growing in people.

That ability could be modified a little – allowing an alien race to look through armor, outer coverings such as clothes or even flesh. I’m just not sure what it would be called, given that X-ray vision would be misleading and would immediately make people think of Superman. Maybe just “transparency” would do.

Flower photographs from here: http://www.naturfotograf.com/UV_OENO_BIE.html#top
Tweet
Posted by Marian Perera at 7:16 AM

Great post, Marian. We usually focus on how aliens would look--but how they perceive the universe would tell us much more about how they behave and why.

I always love the great questions writers ask about our world!

Very interesting thoughts. Out of all our senses as humans, its amazing how much we rely on just our sight to "see" the world. I loved this post.

I love the idea of seeing things like glass. Do you remember what book that was?

This is such an interesting subject.

You are correct that dogs have dichromatic vision: red-green color blindness. That means that they see red, yellow, and green as the same color: yellow. I've implemented dog vision in my Color-Blindness Simulators Most mammals are like that; we share our trichromatic vision with (other) Old World simians.

However, many birds are tetrachromats (Color Vision of Birds), with the extra color extending into the ultraviolet.

There's an additional ability that various animals have: to see light polarization. There are two main kinds: linear, a combination of horizontal-vertical and diagonal-diagonal, and circular, either left or right.

Reflections linearly polarize light, which is why polarizers are useful as glare filters. Bees use the sky's linear polarization for celestial navigation; its orientation indicates the direction to the Sun.

Mantis shrimp not only have super color vision, extending into the infrared and ultraviolet, they can see linear and circular polarization. That can be useful for recognizing other mantis shrimp (How mantis shrimp see circularly polarized light).

As to seeing gases like hydrogen cyanide and carbon monoxide, that's possible if you can see in the near infrared and pick up their vibrational spectral lines. That ability has a bonus: you can also see carbon dioxide and water vapor.

Scott - I watched a lot of Star Trek, so I know what you mean by looks. That's probably the easiest thing to change about aliens, but as you said, getting below the surface tells us more.

Courtney - Thanks! It's also interesting just how much we don't see that other species do. Then again I'm not one to talk. It's been a long time since my vision was 20:20.

Maria - I'm afraid all I remember of that book's title is that it started with "The Glass" or the "The Crystal". I read it in my early teens, so it's not even a new book.

Loren - I had a feeling you'd comment on this - with much more detailed information than mine. :)

The part about polarization is interesting because last semester we learned about chemical substances that can be detected with polarized light. I think the substance was amyloid but I'd have to check it up to make sure. There was something about "birefringence" too.

Birefringence - Wikipedia Applying an electric field to a material will make its electrons move one direction and its nuclei the opposite direction, polarizing it. An electromagnetic wave will interact with this polarization and slow down. If a material has certain asymmetries, it will get polarized more in one direction than in another, so different polarizations of light will travel at different speeds. This is best-known for crystals of various materials, like calcite, which divide light into two linear polarizations. The crystal structure has the overall asymmetry that makes this effect happen.

Liquids don't have crystal-structure asymmetries, of course, but molecules in them that are not mirror-image symmetric can split light into circular polarizations: Optical rotation - Wikipedia. This will cause the direction of linear polarization to rotate. That's presumably what was used to detect amyloid. But most biological molecules have mirror-image asymmetry, and thus that ability; I found a table of rotation rates for amino acids, and a description of a lab experiment for demonstrating that rotation for solutions of table sugar.

Great article and good for world building purposes. Not only in sci-fi but also in fantasy or anywhere you're dealing with non-humans.

How we see the world determines how we tend to perceive it.

Thanks, ralffast! Aliens that are so fundamentally different from us are a lot of fun to imagine.