Warning: there be spoilers In The Nightside. 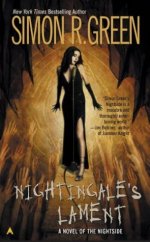 The premise is simple: a bizarre place called the Nightside coexists with London-as-we-know-it, and John Taylor is a detective who works and hunts In The Nightside, while trying to learn more about his own mysterious past.

Most urban fantasies are set in some place that’s dark and gritty, and the Nightside is no exception. I was intrigued from the moment I read that In The Nightside, it’s always three o’clock in the morning, and the dawn never comes. It’s a flashy place, though, reminiscent of the Flesh Fair in Spielberg’s A. I. and crammed to the eyeballs with all manner of creatures and magic.

Most of the time, this is fascinating. I love good worldbuilding, so I enjoyed the Brittle Sisters of the Hive, the entity Lamentation and Pretty Poison. There are some vivid pictures and ideas here, to the point where I find them sparking my own imagination. And despite the plentiful references to blood, gore, death and pain, I didn’t find these books as dark as Perdido Street Station or Scar Night. Perhaps it’s the touches of humor here and there, or the fact that the main character hasn’t undergone any major loss or heartbreak so far.

I like variation and scope in worldbuilding, but sometimes it seems as though the author has never come across a speculative fiction concept that isn’t worthy of a mention – to the point that when I read about the protagonist eating celery to stave off poison gas, I knew there would be a Doctor Who reference coming up. It’s amusing, but it also reminds you that you’re reading a book, as opposed to being part of it, being there, In The Nightside. And I’m capitalizing those three words because the phrase is used a bit too often, both in the first-person narrative and in the dialogue.

There’s also no indication of how elves and Romans and demon succubi and Lady Luck and giant teddy bears and talking horses and poltergeists all fit together In The Nightside. The ecology, politics and economy of the place take a distinctly second (or third, or fifth) place to the next bizarre concept or person that the protagonist will encounter. But the books are so short that this is understandable; there isn’t a lot of room for characterization or complex plot.

Instead, it’s a fast ride through the Nightside. Pacing-wise, the books are fine except for the paragraphs of exposition - through both narrative and dialogue – though I was intrigued enough by the worldbuilding to read through these. At least they were never boring.
I haven’t said much about John Taylor because I couldn’t really connect with him. He’s also so overpowered that I couldn’t really be afraid for him either. He has a third eye, a private eye (yes, that joke crops up in every book) which enables him to find anything, and he can also affect things without touching them.

So, for instance, he can enter access codes to security locks, lift bullets out of people’s guns, sever the threads binding thralls to a demon, and so on. Sometimes this is described as “It was the easiest thing in the world…” but that doesn’t really make for lots of tension. When the going does get too tough even for him, he has friends, protectors or people he’s hired to watch his back. And at one point he even bluffs a magic door into telling him the password, simply by telling it, “What did I just say to you? What’s the password?” I love protagonists who outwit the opposition, but there just wasn’t much wit to out here.

The books are still entertaining. They’re so slim and fast-paced that I found them easy to get into and picked up a whole batch from the library, going through them like mini appetizers. They’re not the main course. But they’re a roller-coaster ride through a many-faceted place, and I could do worse than spend a little time In The Nightside.

Posted by Marian Perera at 6:38 PM