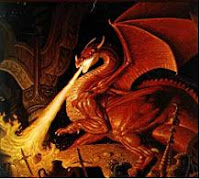 One day I tried to come up with a fantasy featuring dragons that weren’t mounts, friends, foes or simply wild creatures. The result was Dracolytes.

Karne isn’t as distinctive geography-wise as lands in other manuscripts of mine, but its people make up for that (it’s based on the beehive model). The Karnish population is skewed gender-wise, with three times as many women as men, and relatively few people of each generation are chosen to breed. Broodmothers produce over a hundred offspring and then die.

The ruler of Karne, the Immolated Queen, reigns in the west of the land. She survives birth since she only has to produce six or seven daughters, who fight each other to the death when they are old enough. The single survivor, who is called the Lady of Sulphur and who is the crown princess of Karne, governs in the east, since there’s always a cool cautious detachment between mother and daughter.

Morava Siyyan is a soldier of Karne. The Karnish are called Dracolytes since they worship the dragons who once ruled over them and who are responsible for Karne being the most powerful nation in the land. Long ago, the dragons defeated the enemies of Karne in war, and the Dracolytes took the survivors as slaves.

There is only one living dragon left, though, and the Karnish have waited fifty years for him to come to them. So when a foreigner called Julon Rule approaches Morava with news of this dragon, she’s skeptical at first. And when Julon tells her the dragon is in the hands of their enemies, she’s livid.

Julon, for his part, is hoping the Dracolytes will pay him for the news. He studies the science of the mind, and is in need of money to fund his experiments. Morava arrests him for blasphemy instead, and the Lady of Sulphur interrogates him. She decides that although he’s lying about the dragon, she would like to know who put him up to it.

So she releases him and sends him back to his homeland – without any money, but with Morava as an unsociable traveling companion. But it’s a long way from Karne to anywhere else, and the best-laid plans of dragons and Dracolytes can go astray…

Morava Siyyan is brave, loyal and fanatically religious, like most Karnish. As long as people show dragons the deference due to them, those people are her friends or at least equals. But one reason she dislikes and distrusts foreigners is their lack of faith – or, as in Julon’s case, outright atheism, which is even worse.

Morava’s dream is to do something for her homeland that no one has ever done before. She isn’t sure what this could be – given that in in the hierarchy of Karne, she’s just a foot soldier, not to mention a little hot-headed and impulsive – but she’s happy with her life so far.

Julon Rule is a psychologist trapped in an asylum – or at least, that’s how Karne appears to him. He’s frustrated that they refuse to believe him, though he’s even less pleased to be saddled with Morava when he’s released. Julon is educated, sarcastic, cautious and an unbeliever in the divinity of the dragons, so his dearest wish is to return home safely. Though if he can sell information – behind Morava’s back – to someone who may or may not be a spy for an enemy of Karne, he won’t hesitate too long. He does need funds for his research, after all…

Dragons + religion + psychology = Dracolytes. What I like most about it is the friendship that slowly develops between Morava and Julon – though I don’t think either of them would admit to that in public. There’s the dragon, the last living deity of Karne, and those who hate him. And it’s the only one of my manuscripts which has a twist in the last sentence.

”Death has no lasting power over gods.”
Dracolyte proverb

Posted by Marian Perera at 4:48 AM