The story in a nutshell: Timothy Treadwell was obsessed with grizzly bears and spent over a decade of summers filming them in a national park, taking unbelievable risks and breaking regulations to do so. At the end of the thirteenth summer, in October 2003, he and his girlfriend were both killed and partially eaten by a bear. Grizzly Man

is a documentary by the director Werner Herzog, featuring Treadwell’s footage of the bears plus interviews with people who knew him.

Before I was five minutes in, I knew Treadwell wasn’t mentally balanced. Filming himself with a bear feeding in the background, he claims he’s a “kind warrior” but adds that if the bears become aggressive, he needs to be a “samurai”. He seems to be just one katana short of a Quentin Tarantino movie.

Treadwell frequently claims he’s protecting the bears. Park Rangers make it clear that there is no poaching in that particular area—and I believe them, because if Treadwell had stumbled across corpses with their gall bladders cut out, that would be on tape. Instead, all we see is him wearing a faceful of camouflage paint as he stalks imaginary poachers. If I were hunting grizzly bears, with the kind of gun that could take those out, a skinny unarmed man with a camera would not be a problem.

The only other people he actually comes across are also there to take pictures, which inspires a rant from Treadwell about “commercial people” invading his turf—I mean, the bears’ turf—with cameras. The irony seems completely lost on him. These people, having spotted him despite his masterful camouflage, pile up rocks and draw a tiny smiley face on them. Treadwell films that carefully, then explains it’s a warning.

Yes, he’s paranoid too. Or just so delusional he imagines he’s in a movie where he’s the hero, the animals are his loyal sidekicks and everyone else, from the tourists to the Park Rangers, is the villain.

Putting aside his need to play bear whisperer—his only claim to both fame and financial support from his fans—the problem with his actions isn’t only that they culminated in the deaths of two people and two bears. It’s that, for all his claims to understand and love grizzlies, very little of what the documentary shows us is actually about them.

Treadwell is in the forefront of nearly every shot. When he comments on the bears, it’s not to point out some aspect of their lives which might otherwise have gone unnoticed—it’s to say this is a friendly bear whom he’s named Mr. Chocolate. At times he comes off like a child - “He’s a big bear! A big bear! Wow!”

For me, the fascination of wild animals is their wildness and their animal nature—what makes them different from us. As a helicopter pilot said, Treadwell acted as if the grizzlies were “people in bear costumes”. He croons “I love you” to bears and foxes in a high-pitched voice, as if sending out enough happy thoughts will make them “bond as children of the universe”, as the pilot put it.

The film is like watching someone play Russian roulette again and again, giggling with the thrill. At one point, a bear is swimming and Treadwell enters the lake up to his waist. The bear paddles out. As it moves past him, paying him no attention, he taps it on the rump.

This is more than being an adrenaline junkie. This is someone who can’t stand being ignored. Imagine a stranger in your house, someone who didn’t speak any language you could understand but who followed you around making occasional attempts to touch you. That’s wildlife harassment, something the National Park Service noted in their file on Treadwell.

Rather than watching the animals as they go about their lives, Treadwell forces himself into their environment. A few shots of bears where he isn’t looming in the foreground show his fingers darting into the frame to touch the bears’ muzzles. He sets up his tent in heavy brush, between two dens of foxes, and pets their cubs—all of which has the effect of habituating them to humans.

Amie Huguenard, his girlfriend, is a silent nonentity. She appears in only a few minutes of his footage, keeping her head down because a nearby bear is looking in her direction. It’s obvious she’s afraid. A professional in her mid-thirties, she felt he was “hellbent on destruction”, as he wrote in his journal, and was planning to leave him.

The only parts of the documentary I could enjoy were those which focused on the beautiful scenery, and where Treadwell was too far away from the animals to either bother them or be in the picture. Like this one. 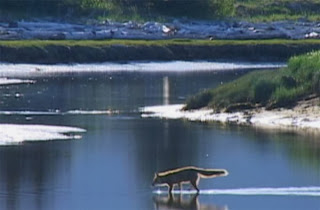 The film is worth watching if you want a glimpse into a seriously disturbed mind and are prepared for many jawdrop moments. I won’t even get into Treadwell’s rant about how good he is to “girls”, who don’t seem to appreciate his many wonderful qualities. Ultimately this quote from the director sums it up for me.

And what haunts me is that in all the faces of all the bears that Treadwell ever filmed, I discover no kinship, no understanding, no mercy. I see only the overwhelming indifference of nature.

Which is as it should be. The bears owe us nothing. Superimposing human relationships, thoughts and emotions on them isn’t just meaningless, it’s dangerous to us and disrespectful to them. It diminishes them, makes them Furface or Cuddles instead of the magnificent wild animals that they are. That’s something Timothy Treadwell would never have agreed with. Because without the animals playing supporting roles, providing an exciting background—and purpose—to the movie of his life, he would be alone on an empty stage, a nobody.

I'm sorry to hear his girlfriend paid such a high price for being with him. He was a nut. I'm surprised the Park Service didn't ban him--not that it would've stopped him.

I don't know if it was him, but I remember seeing a picture of the remains of a man almost entirely gutted by a bear. It was an awful way to go.

The Park Service had all his violations of regulations on file, and were considering going to a magistrate when the tragedy occurred. But I think you're right - he was so obsessed he would probably have tried to sneak in anyway.

It is an awful way to go. The camera was recording sound (not visuals) when the attack occurred, and apparently that lasted six minutes, with the bear leaving and then returning to its prey.