The Story of the Christmas Bookcase


A couple of years ago, I went to a friend’s place for the first time. Flanking her large-screen TV were two large, beautiful solid wood bookcases. I wasn’t in the least interested in the TV, but I admired the bookcases and asked her where she had bought them.

She said her father, who was a carpenter, had made them as a gift when she got married. Since it wasn’t likely that my father, who is not a carpenter, would give me a bookcase for marriage or on any other occasion, I decided I’d buy one once I had enough disposable income. I really wanted a large solid piece, because I already had a small one that I assembled from instructions.

One day I noticed someone had left a headboard by the side of the road nearby, and the headboard had shelves. I always need shelves for my books, so I asked my friend Godfrey to help me get it into the basement apartment where I live. While he was doing so, I told him about my plans to get a solid wood bookcase some day. Godfrey, being the dear soul that he is, offered to make me one.

“Ooh,” I said. “Can you do the top in a fretwork design? With carvings of—”

“You’re getting a bookcase,” he said. “Email me the dimensions.”

So I measured the space I had and decided the basement could accommodate a six-foot-tall bookcase. I would need to stand on a chair to reach the top shelf, and it would be so wide my entire Fighting Fantasy collection could fit on one shelf. 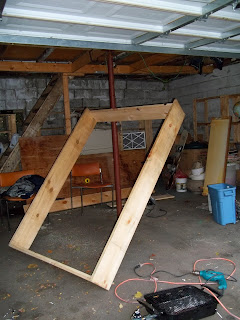 Godfrey set up shop in the garage. This is the frame that would be my solid wood bookcase.

Finally the day came when the bookcase was complete, finished and stained. I wanted the wood left unfinished, so it had a beautiful, natural look. And I do mean natural, because one of the shelves had a hole where a knot had fallen out. “It’s a feature, not a bug,” I said, and asked Godfrey to take my picture next to it. 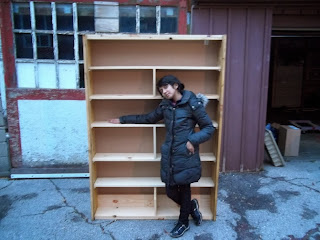 "Wow," I said, "that picture makes me look really tiny."

"News flash," said Godfrey. "You ARE really tiny." Then he called his brother to help him move the bookcase into the basement. 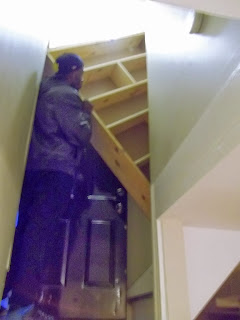 At this point it became clear that although I’d measured the bookcase for my apartment, I hadn’t measured the bookcase for the narrow doorway leading down the steps. Godfrey and his brother lifted and turned and pushed and twisted. But short of breaking through a wall, and possibly having the house (if not my landlady) descend with a roar on our collective heads, that big, beautiful, solid wood bookcase was stuck. It couldn’t go down the steps. 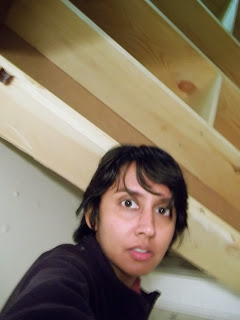 This picture is captioned: "We're gonna need a bigger hallway."

“Godfrey?” I said finally. “For next Christmas, could you make me a coffee table?”

So they moved the bookcase back to the garage and Godfrey said he would build me a smaller one some time soon. Moral of the story: do not look a gift horse in the mouth, but also do not ask for a Shire when you have a Shetland-sized hallway.

Posted by Marian Perera at 9:05 AM

I like that! I didn't have any paint, so it was a good thing the headboard didn't need to blend in with the rest of my (admittedly eclectic) collection of furniture. Left a comment on your post.