I am a shorn sheep.

For most of my life I had long hair, partly because I was born in Sri Lanka (nearly all the women in my family wore their hair long) and partly because I liked the tumbling-sexily-over-shoulders look.

Of course, at some point the hassle of maintaining it overtook the tumble factor, especially since I don't have a hairdryer. Once it reached waist length it took forever to dry, got tangled frequently and didn't make me look hot so much as lost under all that hair.

So I decided to get a pixie cut, just because I'd never done that before. I think my mother would be turning over in her urn if she knew. 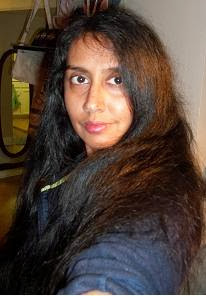 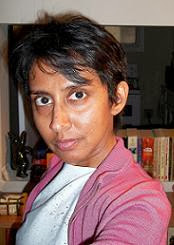 I'm still trying to get used to it (probably why I don't have such a big smile in the second picture). My head feels lighter, it's easier to take care of and I saved the now-disembodied hair to donate. But it's still such a radical change that I haven't shown it to anyone. Until now. Tweet

Posted by Marian Perera at 8:50 AM

I'm the opposite. Had short hair, and now am loving it long.

It's nice to live in times when we can make that choice. Something easily taken for granted.

I remember reading a book on Victorian fashion that discussed how shocking it was even if a woman didn't center her hair in the middle. And you can pretty much date a picture by the height of a woman's chignon.

And you're right, it seems like such a basic choice - how we like to wear our hair. But if you've always had that decision made for you by your family and your culture, it's not so small and simple.

I also had no idea the Victorians felt that way about hair. Do you know what a woman's hair parted in the middle always reminds me of? Ted Bundy's victims. They were all pretty brunettes with long hair and most of them parted it in the middle. When you see all their photos put together, the resemblance really leaps out.

Your new haircut looks great! I love having short hair because it's so much easier to look after and you're lucky that it suits you so well.

As did the long hair for that matter; you look great either way. And aren't we lucky that we have that choice?

As said above, both look good. You're probably finding a big difference in the weather we're having now (all the wind, I mean). And you will feel a difference in the summer (if you keep your hair short, remember to use sunscreen on the back of your neck).

fairy hedgehog - Thank you! You're right, I can't get over how easy it is to take care of. Shampooing is over in no time. Drying, too.

Randall - I've never used sunscreen anywhere, ever. Growing up Asian in the Middle East, no one did... we just got toasted brown. :)

that's very brave of you. I couldnt do that, what did you do with the rest of your hair. Donate it to cancer patients? I've always wondered...

Thanks, Eniola. I had to ask myself, "Self, do I really want to reach the age of 40 (some day) and look back and think that I never tried a pixie cut? No, I don't think so."

And yes, I'm going to check with the Odette Cancer Centre that they take hair.

Marian: Yes, I should have realised that. Mea culpa.