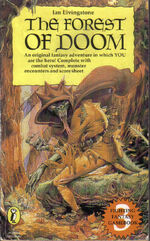 Fighting Fantasy role-playing gamebooks were a phenomenon of the eighties, but dwindled in popularity with the rise of video games. Still, retro sometimes comes back into fashion—several of the original gamebooks have been reissued by Wizard Books—and Fighting Fantasy remains popular among a lot of people who grew up in the eighties and fondly remember rolling up SKILL and STAMINA scores.

Myself included, of course. I have the entire collection—some of the books I bought over fifteen years ago, and purist that I am, they’re all the original releases. Recently, though, I found a couple of bloggers who are playing through the books and describing the experience, including the incongruities of the stories, the amazing number (and type) of meals you have to eat and every time you die.

The latter is one of my favorite things about the series, of course. The more sophisticated the books became, the more elaborate the deaths (or non-victory adventure endings, i.e. more or less the same thing).

Dan of Fighting Dantasy tackles every book in the series. The moment I read this ending to his City of Thieves

adventure I knew I would enjoy his blog.

I had no food either, having traded it all for a silver arrow.

So when a boy came up to me offering to sell me either plums or apples, I was ecstatic. He recommended the plums, and knowing this town pretty well by now I chose the apples, and they were a bit off, doing a single point of stamina damage. Problem: I only had one point left.

I was killed by an apple marginally past its use-by-date.

Then there’s Sword of the Samurai

Next thing we know, we meet a forty-foot centipede, which I assume must've been common in medieval Japan...? It bit off Moichi's arm, and no amount of food was going to fix that, so I felt justified (but not exactly honourable) in not giving him any. If he needed food that badly, he should have bought his own.

The other blog is Turn to 400, which is much more detailed and snarky.

Somebody needs to let these guys know that when it comes to last words, pithiness is what gets you over. You shouldn't be glancing at your wrist-watch during a guy's dying words. You shouldn't start wondering what might be for dinner. You shouldn't have to interrupt to clarify whether the man is, in fact, actually dying at all, or whether there might still be enough time to drag him down off the mountain or invent all of modern medicine.

I can’t wait for the author to get to my favorite book, House of Hell

You can also check out back-issues of the Fighting Fantazine here - they’ve got mini-adventures, interviews with authors and artists, humor columns and much more. Enjoy (and don’t drink the white wine)!

I had forgotten about those books. I had friends in the eighties who were very devoted to them. Thanks for the reminder. It's cool that people are preserving the tradition.

And not just preserving the tradition but updating it... from what I hear, there are FF e-books and apps as well. Ah, technology. Sometimes we use it for good.

I read The Hobbit when I was six or seven, but if not for FF I don't think I would have fallen in love with the genre to this extent. FF is just so much more vivid and playful.

It also helps that the books don't have the complexity of, say, D&D. Or evem Blood Sword - I love that series too, but I have to stop and think about the fight rules rather than just jotting a few figures down on the back of an envelope and playing along.

I remember those books through my sister. She used to love them. I remember reading one...Phantom of the...something or other. Had a green background with a red creature on the cover. I browsed through it as I wasn't that big on reading at the time...

Phantoms of Fear, that's the book. I only know this because Fighting Dantasy covered it back in August 2008 lol...

Great links and funny, funny witness to some great endings in role-play.

There used to be some really funny "last lines of the RPG player before he dies" and I forget where. I miss this kind of stuff!

DRC - Phantoms of Fear is one of the weirder ones, IMO, and the cover reflects that. It's definitely not the best introduction to the series. :)

Diane - oh, I wish I could find this website that collected unforgettable moments in RPGs. The best was when the players (unknown to them, of course), picked up this lump of what looked like valuable ore but which was highly radioactive. Apparently they didn't realize what was going on even after their hair started falling out.

Never heard of them and I thought I seen them all. Of course right now my group is using system based on the Dragon Age video game RPG, so I guess it comes full circle. Also D&D pushed the evolution of video game RPGs through the Gold Box collection and now it is suffering because of it.

Rafael - I like collecting the obscure stuff. :) Like the "Blood Sword" and "Way of the Tiger" role-playing gamebooks, which are probably even less well known.

And when I started buying these, it was either alibris or eBay. Now there are a lot more options for collectors.