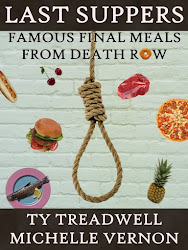 I haven’t read this book yet, but it’s going on the list. Last Suppers: Famous Final Meals from Death Row

, by Ty Treadwell and Michelle Vernon, not only describes what condemned prisoners last ate, but includes jailhouse recipes.

That would make for an interesting dinner-table conversation. “This soup is delicious.” “Why, thank you. It’s based on the Alcatraz recipe – with a dash of fish sauce for that Hanoi Hilton flavor!”

But for those of us who aren’t into cooking for large numbers of hungry felons, there’s still a lot to enjoy. James Smith requested a lump of dirt, which he didn’t get. Maybe the prison yard dirt was just too gravelly for him. And Victor Feguer asked for a single olive, unpitted. He probably got that.

David Castillo, though, went to the opposite extreme and ordered “24 tacos, 2 cheeseburgers, 2 whole onions, 5 jalapeno peppers, 6 enchiladas, 6 tostadas, one quart of milk and one chocolate milkshake”. I’m thinking that after such a meal, prison officials might as well have sat back and waited for his cholesterol levels to kill him.

Entertaining though this is, the authors never let you forget that the people in question committed despicable crimes – each section has at least a one-line mention of the condemned prisoner’s murders. I won’t say you need a strong stomach (no pun intended) but it’s not entirely light-hearted either.

Which got me to thinking about my own last meal. No contest, really. I’d want a full Sri Lankan spread – rice, chicken curry, murrunga (drumstick curry), mallung (chopped greens), mango chutney, poppadums and coconut sambol hot enough to cause spontaneous weeping six feet away, washed down with a glass of sweet coconut water. The only thing I’d decline would be a banana leaf platter. I am somewhat Westernized.

What would your ideal last meal be?

This is actually a trending topic as Texas recently banned giving last meals after they got punked by a gigantic request the guy didn't even eat: http://www.metro.co.uk/news/876488-texas-bans-last-meals-on-death-row-after-man-leaves-entire-expensive-dish

Just instituting a $100 budget limit might have been the more reasonable response... but, Texas...

I don't have any real idea what I would want as a last meal. It's something I'd have to think about, and given the circumstances where I'd order one, I'd have plenty of time to do so.

My last meal? hmmm...Would be difficult to decide. Maybe something Mexican- nice and spicy.

Or to go in a totally different direction, Greek. Finished with a big piece of baklava.

I think the last meal is too kind for felons who committed such horrible crimes.

I don't blame the Texas penal system for banning last meals, especially given the way some people abuse the system right to the end.

They can have the same meal as the rest of the inmates. There shouldn't be a reward for committing crimes or for getting punished.

As for my last meal--as much as I would love Mexican food, I'd probably go for something light. It'll probably be warm where I'm going. :)

I know when I think about murdering someone, the prospect of being rewarded with a big meal before the state kills me is a real incentive to pull the trigger!

Thanks for the link, JH. I didn't even know there were such things are beef omelettes, but now I want one.

I'm surprised prison officials actually accommodated his request for so much food in the first place, though. There was no way any normal person would have been able to eat all or even most of it.

Tasha - Mexican would be good too - or Thai red curry. I'm guessing alcohol can't be part of a last meal, which is a shame. A glass of cold Chardonnay would just about hit it.

Maria - I figure there's no harm in giving someone a single olive if that's what they really want. But spending a lot of money on a last meal is crazy.

And wherever you're going, I hope you take a lot of doggie treats. :)