All My Friends Are Dead 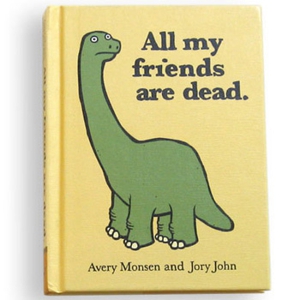 I write fairly lengthy reviews of books, especially if I like them. This will be an exception.

In All My Friends Are Dead

, by Avery Monsen and Jory John, the cartoons and captions speak for themselves - you can read the first few pages here. The dinosaur's compatriots may all have died, but the sock has lost his only friend. And the tree is painfully aware of his future as an end table. Though he's probably lucky compared to the cassette tape, who has no future.

Each character, animal, plant or object has some bleak but amusing awareness of its own impending doom or predicament - with the sole exception of Death, who happily goes about doing his job. This book is cynical and depressing and hilarious at once. And I'd love to see a sequel where one bacterium alone on a vast Petri plate is saying, "All my friends were susceptible."

Posted by Marian Perera at 6:15 PM

This looks like a children's book, but I don't think my three-year-old is ready for something like this.

That bacterium would only be lonely for about twenty minutes or so before it divided.

Lol, I thought all YOUR friends actually died! Happy to see that isn't the case :D

Sandra - Zing. Next page shows the bacterium with lots of new friends. A clock on the wall indicates that three or four hours have passed.

Next page shows the plate being taken in the direction of the autoclave.

"Where are we going?" says one bacterium.

"Off to our next adventure!" says another.

FantasticFiction : I'm planning to buy it for one of my friends - she's got a cynical sense of humor. :)

I can see this big has a limited appeal, but it does sound hilarious.