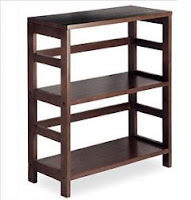 Writers can never have too many bookcases.

After CSN Stores offered me the opportunity to review a product of theirs, I selected one of their bookcases – the Winsome Espresso Wide 2 Section Storage Shelf. It was just what I needed:

1. Compact, so there won’t be any problems carrying it out of the basement apartment where I currently live

2. Two shelves, but the uppermost surface doubles as a third

3. Attractive dark finish. I would have preferred a lighter color, but above all I wanted something that wouldn’t look obviously particleboard-y, and this doesn’t.

The case arrived quickly, but to my dismay, the assembly instructions said that it was a two-person job. I had to manage it on my own, and so I did. I don’t have any experience with putting furniture together, but anyone who’s familiar with doing so – and who has someone else to help hold the sections together – should be able to assemble the case in half an hour, probably less.

The bookcase holds several of my larger and heavier books without any problems (I’m not confident in my furniture-assembling abilities so I look at it every day, but it continues to stay upright and functional). And some day when I have a larger place, the bookcase will double as a shelving unit for… hmm… for other things I may own at that point.

So, all in all, a very nice piece. I took photographs of it pre- and post-assembly, but alas, I had to borrow my landlady’s camera to do so and must wait for the photos to be developed. But when they are I’ll put them up on my blog.

Thanks to Caitlin at CSN Stores for this opportunity!
Posted by Marian Perera at 11:53 AM

Looks great! And how cool that you now have a new bookcase!

How are you my friend? I hope you are having a lovely summer. So much has happened, I've been meaning to send you an email.
x0x

I've put furniture together, and so far, like your bookcase, they're remaining upright. It looks to be a perfect bookcase, though I prefer ones with glass doors and castors.

Hey Kim, good to hear from you. :) Congrats again on the Behler deal, your book has found a good home!

Things have been hectic here; I did a sort of NaJuWriMo, trying to finish the sequel to my first novel. It's done now, but I feel like a steamroller went over me.

Of course, you know what the cure to that is, right? Start another book!

Good point about the glass doors, Barbara. Someday I may have a bookcase like that for those items I couldn't replace - like my copy of The Good Earth which my grandmother received as a Christmas present in 1949 and which nearly got EATEN by silverfish in Sri Lanka.