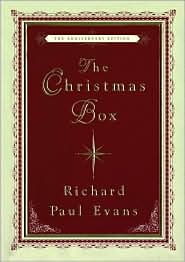 is often held up as an example of how self-published writers can succeed. The author, Richard Paul Evans, published this novel himself, but the popularity of the book led to a advance from Simon & Schuster, and the book hit the New York Times bestseller list.

Plus, this is a novel. Self-publishing is rarely if ever recommended for fiction.

But an interview gives an insight into the phenomenon, the work behind it and his realistic take on self-publishing. It’s a must-read for anyone curious about how he made a success of his book.

Evans did it, as most self-publishing successes do, with a combination of money, hard work, a well-thought-out strategy and a book that people wanted to read. I found this detail especially telling.

If your book does not look as good as a book published by Doubleday, which is who you are competing with, don't bother.

is sometimes used as an example of what writers can do even without a publisher’s marketing department behind them. The reasoning is that because the author was extremely successful promoting and selling his book on his own, writers can self-publish (or go with a press that offers them no advertising, marketing or distribution) and still enjoy good sales.

But Evans succeeded because

1. His book had a professional-looking cover.

He knew the importance of cover design. Sometimes, self- or vanity-published writers say that the publisher doesn’t matter as much as the story does, that readers don’t check who printed a book before they buy it.

But readers aren’t likely to pick up that book in the first place if it doesn’t have an attractive cover. Commercial publishers are more likely to produce distinctive and competitive covers than either vanity presses or inexperienced self-publishers.

2. He had the funds to print and promote his book.

The figures in that quote jumped out at me, of course, but then I noticed that he hired a “local” publicist and cornered a specific market. In other words, he spent money wisely. He didn’t try to get national recognition right away. He knew that if he could show strong sales in one state, that would be better than poor sales spread over a large region.

3. He was savvy and tireless about marketing.

Without a publisher's marketing department on his side, he had to work even harder. Tours, radio shows, book signings, independent stores… Evans did it all. He’s like the J. A. Konrath of self-publishing. And part of his success may be due to his ability to see it from the booksellers’ perspective, to recognize that they were under no obligation to carry his book unless they saw evidence that it could make money for them.

At the same time he took risks, such as his strategy at the Mountain Plains book show, before his book was at all well-known. I wouldn’t particularly want to be in such a situation, but if I were, hopefully I’d have the guts to pull off what he did.

But despite his success, Evans encouraged writers to submit their work to agents.

In studying self-publishing, you will see both history and the law of chance aren't on your side.

In other words, his book is the exception that proved the rule, though his story is an inspiring one for all writers.
Posted by Marian Perera at 5:48 AM

That was really insightful. It's nice to see a self-publishing story that's realistic, and isn't 'writers don't need publishers' hoopla. He's a great example of the smart way to self-publish, if one chooses to go down that road. Don't think I could do it, but kudos to him for making it!

Hey Marian. Just wanted to let you know you were in the first ten to win a Feeling For Bones-themed bookmark. Email me your mailing address if you're interested in having it.

M. R. J. : Exactly - the story was realistic and Evans knew exactly what he was doing. His entire strategy was crafted with getting the book to readers and then getting the attention of people who could distribute the book to even more readers.

I couldn't do it either. I'd have to be a great marketer as well as a writer.

Lauren : Thank you, sending an email you way!

I agree fully with the other commenters: he had a realistic goal, and a wise marketing plan to follow it through.

Due to my own lack of marketing savvy- it's unlikely I'd choose that path. But for those who do- he used a very good model to emulate.