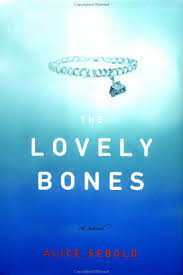 This is a book with too much realism… and not enough of it.

and skimmed the second. I first became curious about Alice Sebold's bestselling novel when I watched the beautiful, chilling trailer on YouTube, and after that I had to read the book. Thanks to a contest on the blog Bookin' with Bingo, I got a copy of my own.

My name is Salmon, like the fish; first name, Susie. I was fourteen when I was murdered on December 6, 1973.

That’s the start of the novel. Talk about a first sentence that yanks you in by the throat.

The book is told from the point of view of a girl who, after her rape and murder by a man from her neighborhood, goes to heaven. Or what could be heaven, if it wasn’t a perfect world in which she’s trapped, watching as her family tries to pick up the pieces and as her murderer lives out his mundane facade. As life goes on, which it is wont to do, though not always as it should be.

While Susie’s father does suspect the correct person, there’s no evidence to back up this intuition. Susie’s killer, Mr. Harvey, has murdered half a dozen girls already, and he was careful. Here’s where the book is most realistic, by the way. Mr Harvey accosts Susie alone, at night, and picks the correct time – just before a snowfall that destroys any traces the police dogs might have found. Later he dismembers her body, puts the remains in a safe and dumps that into a sinkhole.

After the house changed hands, the new owners tsk-tsked at the dark spot on the floor of their garage. As she brought prospective buyers through, the realtor said it was an oil stain, but it was me, seeping out of the bag.

All that remains is a fallen elbow-joint (which the police later find). I kept hoping the sinkhole would be drained and the remains found, but they never are. Again, that’s very true to life. And Susie’s father doesn’t deliver dramatic vigilante justice. The one time he does come close to using physical violence on another person, the attempt backfires with disastrous results.

The rest of Susie’s family changes as well. Her younger sister closes off, forcing herself to toughen up both mentally and physically (very plausible). Her mother, a housewife already unhappy with her marriage, has an affair with the detective in charge of the investigation (less plausible). Meanwhile, Susie is adapting to her heaven – while also realizing that she won’t grow up and will miss out on so much in life.

The problems began here, since a protagonist who can’t really do anything isn’t going to be very gripping – and a murder mystery that will never really be solved is probably not going to help. Susie is a precocious and sympathetic character, but she has no flaws and no obstacles to overcome in her heaven.

There is a chapter towards the end that seems to have been included to compensate for this, where Susie falls back to earth, possesses the body of another girl and has sex with the boy who gave her her first kiss. It’s a bit like Ray Bradbury’s “The April Witch”, but the characters in that story ring true. In this chapter, I didn’t buy it.

And Susie’s heaven, while clearly meant to be a beautiful and welcoming place with fields of flowers, gazebos, music, friendly dogs, etc. was a little like a Thomas Kinkade painting. Attractive scenery, but there’s not much depth or events of consequence. There are hints that there’s more to eternity than a pretty, perfect world, but I don’t recall anything more than these hints.

After the second half of the book I started skimming. Sebold’s style is much like Susie’s heaven; it’s sweet and flowery to compensate for the fact that very little is happening. There’s a lot of symbolism, much of it to do with the ocean – and the salmon is the fish that has a long journey before it finally reaches its home, and dies. So I’m pleased that I read this book… but I can’t see myself reading it again.
Posted by Marian Perera at 1:00 PM

I agree with you- I enjoyed the book to a point, then I kind of didn't finish it. It was interesting, but pacing wasn't what it could've been for me.

I read the book a long time ago. I wouldn't say I ENJOYED it, it was tough reading. But I did marvel at her originality...in plot, in the way she presented the story.

I don't think I will be watching the movie, though.

I liked the book when I read it some time ago, as well. I did finish it, and thought it was a totally new way of telling a story. She's a great writer, I think!

Don't know if you've read this yet, but this is an essay (or a rant) by Catherinne M. Valente in which she talks about the Lovely Bones, among other literary fictions.

I haven't read it, so I can't personally judge it. But I know a lot of people who were bothered by the same things that you pointed out.

Colby - Good point about the pacing, something I forgot to mention. Despite its explosive start, the book isn't gripping otherwise (except for the scene where Lindsey breaks into the house, and even that was over fairly soon).

Jewel - Yes, I like the book's premise very much. Maybe that's the problem - how could the rest of the book live up to that idea and that opening?

Three of my classmates and I are thinking about watching the movie after our last exam, in about two weeks from now.

Andrea - Hi, and thanks for commenting! The idea behind The Lovely Bones is intriguing, and I like the suburbia setting as well. Not to mention the theme of people or objects being trapped in attractive little worlds (ships in bottles, penguin in snow globe, flies in amber, Susie in heaven, etc.)

Tasha - I think that any time you have dead characters watching/interacting with the living, some questions are going to be raised.

For instance, Susie's observation of her mother having sex with the detective and her sister losing her virginity are described in a lyrical and emotion-filled style. But once the glow of that wears off, I found it voyeuristic. I mean, there is such a thing as privacy.

Plus, how will the mother and sister feel if they ever get to Susie's heaven and find out that she was watching it all? For that matter, were Susie's dead relatives watching her with Mr Harvey? Observing someone you love suffer and die while being able to do precisely nothing to help them is more like hell than heaven to me.

I thought Lovely Bones was well written and a brave book, but the same things that bothered you bothered me too. I wanted SO MUCH for Susie's killer to be caught out and brought to justice, and for her to have something to do with it. The fact that his demise was so long in coming drove me half mad. The soul/body switch at the end was far-fetched, but I was so desperate for a satisfying denouement that it worked for me. What did NOT work for me was heaven.

But boy, that first line is a real cracker.

I also hoped Susie's killer would be found, but that was a disappointment. His mundane behavior just went on and on until it ended arbitrarily.

That section was extremely vague, and it didn't do the story any favors. I'm interested in seeing how the movie handles this, though. I'll write a review of that too.