An offer I had to review 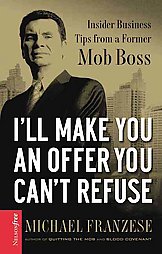 I admit it. I requested I’ll make you an offer you can’t refuse out of sheer curiosity as to why it was published by Thomas Nelson, which is known for inspirational books. The contrast between those and a book about how to use Mafia techniques to prosper in business was intriguing.

Of course, the advice in this book is strictly legal; the author, former mob boss Michael Franzese, doesn’t get into the how-tos of setting up protection rackets. In fact, the book gives an impression of a kinder, gentler Mafia* which has nothing to do with crimes like drug-dealing. On the other hand, even the sanitized glimpses of mob life were interesting, and might be a more palatable read than the real thing.

The advice in the book is fairly basic: play it legal and ethical, lead with your brain rather than your mouth, and make sure that your metaphorical guns are loaded when you conduct negotiations. What stood out vividly were the stories illustrating these points, tales of gangster sit-downs and death threats over matters of family honor. I also enjoyed the breezy, folksy style, though the dozens of quotes (from Macchiavelli’s The Prince and the Book of Proverbs) were a different matter. At only 152 pages, the book could have done with less of these and more of the Mafia stories.

In conclusion, this isn’t a book I’d recommend for businesspeople – too many of the tips seem like common knowledge. But it was an entertaining read for another reason entirely, and almost made me wish I’d had a shrewd underboss for a dad. Because sometimes, it’s fun to walk on the wild side, or to do so vicariously by reading a book.


*And I’ll probably end up with the severed head of a My Little Pony in my bed for writing that.
Posted by Marian Perera at 5:26 AM

I wondered about the same thing, Marian. Maybe they [TN] are growing and not limiting themselves due to economy.

There was a moral message at the end - along the lines of how ethics and morality will end up giving you a better life any day. But coming as it does after stories of extortion and revenge and death threats, it seemed a little tacked on.

And I know which one I found more entertaining, which may or may not be a sad commentary on human nature.

Haha...reminds me of how I almost wished I could propel off of rooftops after watching S.W.A.T.

"But coming as it does after stories of extortion and revenge and death threats, it seemed a little tacked on. "

- Sounds like The Jerry Springer Show when he'd sit down and sermonize after an hour of really-bad-guest-acting and stage fighting.

And with this book, there was a real sense of "this is what it was like in the glory days of the mob" vs. "this is what I should be saying because I am now a good person".

Heck, at the start the author makes it clear that you might need to work a fifteen- or eighteen-hour day to succeed. But at the end, he says that that kind of schedule takes away time that you could have spent with your family.

IMO, a lot of the appeal of fiction or reality comes down to wish-fulfilment, no matter how vicarious. :)